Warning! Unfortunately your browser has disabled scripting. Please enable it in order to display this page.
26 September 2018

Travelling Criminals Sentenced to over 35-years in Prison

Members of a “violent and unpredictable” travelling organised criminal group (OCG) have been sentenced to a combined total of 36 years and four months in prison today following a regional investigation.

Eight defendants entered guilty pleas to conspiracy to supply Class A drugs, namely heroin. Their names and sentences are:

Paul Derek Pannett, 20, of Brigg, North Lincolnshire, also pleaded guilty to conspiracy to supply Class A drugs and will be sentenced at a later date.

The YHROCU launched their inquiry, codenamed Operation Railbird, in December 2015 after South Yorkshire Police reported concerns about a travelling group who were committing numerous offences within the region including ATM thefts, drug supply, robberies and firearms incidents.

In the months prior to Operation Railbird being launched, the behaviour of the group was becoming increasingly problematic and incidents of overt violence, damage to commercial and residential property, knife attacks and firearms discharges were being reported all over the region, as Detective Inspector Lee Fletcher from the YHROCU explains.

“This has been a complex and significant inquiry into a violent and unpredictable organised crime group, who operated through fear and notoriety, believing they were untouchable.

“The behaviour of this group was incredibly dangerous and linked to feuding with a rival OCG, but the escalation of violence experienced in late 2015 posed a significant risk for serious harm and even death within local communities.

“Our investigation into this OCG began with some targeted work around organised crime in Doncaster. Covert policing enabled us to identify locations and relationships of interest, with the intention being to disrupt this organised and violent criminality at any opportunity.

“We were supported in this work by officers from Doncaster district, who in consultation with YHROCU began some low-level disruption activity and enforcement to discourage others from engaging in organised crime.

“Our early activity quickly identified that the main funding stream into the group was that of Class A drugs, with factories found in residential homes in the outlying areas of Doncaster, where massive amounts of heroin were mixed and prepared.”

Between January and October 2016, there was a rolling programme of arrests and seizures led by the YHROCU, which saw a quantity of handguns and ammunition seized from a prominent traveller site.

DI Fletcher continued: “To give you an overview into the significant and excellent work completed by our officers in YHROCU and local forces, over the course of this investigation we have dismantled five safe houses and recovered four hydraulic presses used in the supply of Class A drugs.

“Around 100 bladed weapons including machetes were seized in numerous warrants, along with one Uzi-style machine gun, two revolvers, two semi-automatic guns and ammunition. Many of these weapons were recovered from the travellers’ site in Bentley, Doncaster.

“We also seized around £115,000 in cash from another travelling site in Armthorpe, Doncaster.

“This incredible achievement is testament to the dedication of our officers and staff with the Regional Organised Crime Unit and the collaborative working with our colleagues in South Yorkshire Police.

“As a result of our proactive and targeted policing, hundreds of dangerous weapons are now off the streets and an OCG is behind bars. We will continue to work alongside forces across the region to disrupt and dismantle any criminal groups who are causing harm to our communities.”

Detective Superintendent Chris Singleton from South Yorkshire Police added: “This is an excellent result for the communities of South Yorkshire. As a result of our collaboration and partnership working with colleagues in the region, a dangerous and organised criminal group is now behind bars.

“It is testament to the dedication of our officers in South Yorkshire, supporting those working in YHROCU, that this operation has seen significant seizures of Class A drugs and weapons from locations in Doncaster. I’m grateful to those officers and staff who have worked relentlessly to assist YHROCU with this investigation.

“We are absolutely determined to root out serious and organised crime within South Yorkshire and I hope this positive result reflects our commitment to the communities we serve.” 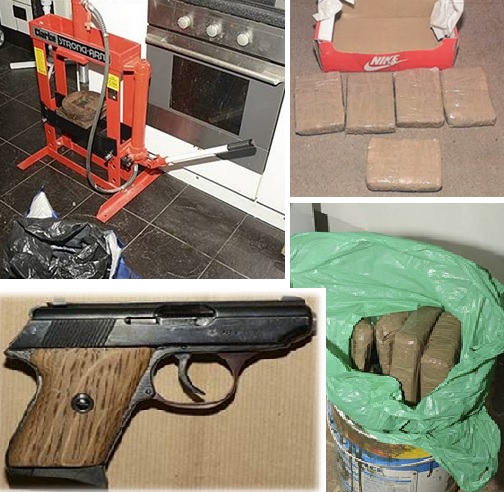